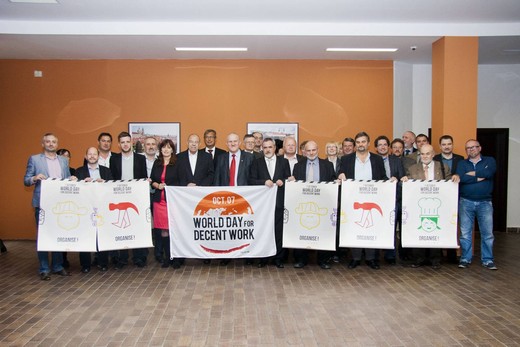 At the branch level, the CMKOS biggest affiliated trade union OS KOVO (metalworkers union) is fully engaged in the global activities against precarious employment in the framework of the IndustriALL Global Union's actions.

The Annual International Conference dealing with changes of labour law connected to re-codification of the civil law, organised by labour law departments of the faculties of law of Czech Universities, commemorated the WDDW during its programme.

The leaders of the trade unions confederations, members of the European Trade Union Confederation (ETUC) from the Visegrád countries - the Czech Republic, Hungary, Poland and Slovakia - met in Prague on 7th October 2013 for their annual meeting. It was attended also by Józef Niemiec, Deputy General Secretary of the ETUC. This year the leaders debated the present economic and social situation in individual countries with special attention to the impacts of the crisis on industrial relations.

Trade union leaders of Visegrád countries discussed also topics connected with the World Day for Decent Work (WDDW) organised every year on 7th October by the International Confederation of Trade Unions. In this context the growing extent of precarious work was pointed out, which immediately and daily harms workers and in the long term negatively influences labour market and makes trade union activities more difficult. Therefore they demand that their national governments and social partners together make steps to stop the existing:

The participants of the meeting believe that these developments can be influenced positively only through efficient steps consistently based upon solidarity, observation of human - and thus also social and trade union - rights.

Trade unions of Visegrád countries join the ETUC campaign for pushing through the demands contained in its Social Compact for Europe aiming at recovery of economic growth, fair distribution of newly created values for the benefit of workers, creation of quality jobs and prevention of cuts in public finances and far-reaching anti-social reforms of pension systems, health care, social services, education, etc. Also in the framework of this campaign it is necessary to prevent breaking up of the fundaments of solidarity and social cohesion, growth of unemployment, poverty and social exclusion and overall reduction of living standards of majority of citizens.

Trade unions of the Visegrad countries express their deep concern over the recent communication of the European Commission "REFIT - Fit for growth", which goes against the will of workers, wage and salary earners, to further not deepen the social dimension of the European Union.

Trade unions of Visegrád countries will appeal to their members and other voters to make their decisions in the elections to the European Parliament next year in the spirit of this campaign.

Trade unions of Visegrád countries in their countries and on the EU level have come up with a number of concrete proposals in belief that many corrections of present unfavourable developments can be achieved by active economic policies, so that the impacts of the crisis on living standards of population were the smallest possible and at the same time the competitiveness of the producers, and thus of the EU, increased in corresponding way.

The participants of the meeting express their solidarity to all actions on national but also on European level for pushing through their and other joint demands of trade unions.